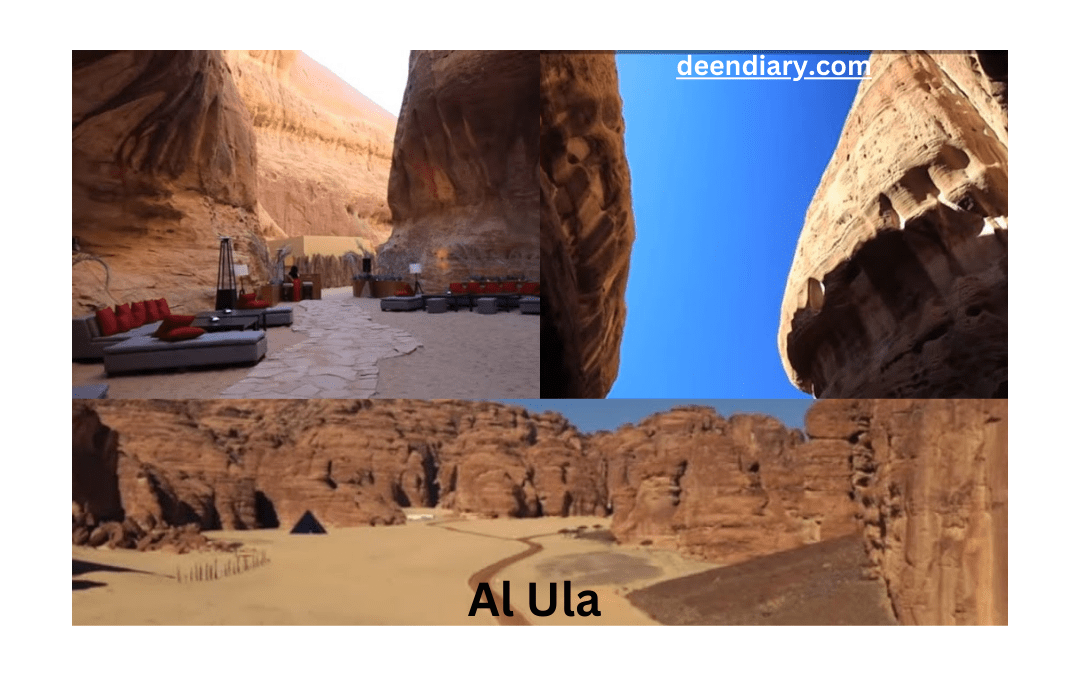 Al Ula is now one of the most attractive world heritages in the world. The capital of the ancient Dedanites is an old city in the Medina region of North-Western Saudi Arabia. This ancient walled city is full of stone houses and mud-brick. Al Ula is a historical city covering an area of 29261 square kilometers and having a population of about 6000. In the 6th century BC, the walled city of Al-Ula was founded in the desert valley with plenty of water and fertile land. Al Ula became an important crossroads along the popular incense trading routes spreading from southern Arabia, north into Egypt, and beyond since then.

The AL ULA area is surely an indication of human greatness and natural elegance. This city is decorated with numerous ancient significant racial plots, attractive oasis valleys, historic stone mountains, and passionate inscriptions. The ancient history of the oasis is now divided into several phases.

Hegra which is also known as Al-Hijr or Madain Saleh got the first UNESCO world heritage recognition in the Saudi kingdom. The name of this town was named as Madain Al-Saleh with the name of the prophet Saleh (PBUH). Madain Saleh was built out of stone more than 2000 years ago by the Nabataeans. Hegra is now decorated with hundreds of preserved monumental tombs situated in a picturesque desert landscape. This town was being used as the southern capital of the Nabataean kingdom.

According to the Qur’an, Madain Al-Saleh was inhabited by the people of Thamud. The tribe of Thamud was the transitoriness of worldly power. So, they were warned by the prophet Saleh PBUH and invited to worship only Allah. But they stubbornly refused their prophet and as a result, Allah SWT destroyed the whole tribe except for the prophet Saleh (PBUH) and a few other righteous and obedient people. According to certain scholars of Islam, this city was destroyed by an extreme and loud shout that caused an earthquake including a thunderbolt and storm.

This town is situated in the narrowest part of the AL ULA valley containing thousands of two-story mud-brick houses, about 400 shops, 5 squares, and a mosque. It was a key town along the Islamic pilgrimage route from Damascus to Makkah in the 12th century. The houses were designed to attach to fortifications so that the inhabitants got extra protection from attack. The access gates of the city were opened in the morning for welcoming travelers, visitors, and pilgrims and closed in the evening. This town is also known as a ghost town of mud houses and stone labyrinths. It has been said that this town was inhabited from the 12th century to the 1980s.

The city of Dadan is one of the most significant discoveries in all of Al Ula. This city was the capital of the Ancient Dadan and Luhyan Kingdoms before the Nabateans. The southern Arabian kingdoms were linked by Dadan by producing valuable odoriferous to the rising markets in the Mediterranean region. The city of Dadan was built meticulously from stone and astride the valley’s oasis. Dadan is also decorated with numerous ancient tombs, masterly carved from a lofty red rock mountain face that overlooks the valley oasis. Dadan was also used as a caravan way station for many people. Indeed, a journey to Dadan will take you through time to discover the ancient and powerful civilizations of the Dadanite and Luhyanite kingdoms.

Jabal Ikmah is a mountain near the ancient city of Dadan which has been described as a huge and the largest open-air library in Saudi Arabia. Al Ula was truly a crossroads of civilizations in Jabal Ikmah, which was visited by those wishing to leave their inscriptions and offerings a route through Al Ula. Jabal Ikmah would be remembered throughout the years for its records in the form of hundreds of inscriptions and carvings lining the cliff faces and rocks. The ancient art of rock carvings and inscriptions are the symbol of historic culture and aesthetics. As a result, many researchers and historians of the world visit Jabal Ikmah to study its centuries-old inscriptions and imprints.

Another name for Jabal Al-Fil is ELEPHANT ROCK. Al Ula is packed with many interesting historical sites and archaeological discoveries. JABAL AL FIL is a natural wonder that may even challenge the appeal of the historic areas. This magnificent geological site was decorated by the natural breeze and pleasing water erosion. Red sandstone centering along the golden desert sands creates a gorgeous scenario of natural beauty. Against the canvas of a free sunny sky, the submerged seating area assumes tourists to be relaxed and prospect the ELEPHANT ROCK.

Al Jedidiah is also a must-visit location in Al Ula. It is known as Al Ula’s art and culture center. Its beautiful murals bring an original feel to the walking-friendly area which presents some nice restaurants for dining and five individual squares to prospect.

Rainbow Rock is another unique form of rock that should not miss visited. This sandstone curve looks like a rainbow rising from two flanking clouds. Anybody who has visited Al Ula and returned without exploring Rainbow Rock, his travel was incompleted in my view. This beautiful architectural monument will make you feel the carved rock just like a rainbow. In the Evening time, you will feel some awesome views of this area with numerous attractive lights and sheds, shops and restaurants, and travelers and interests.

From around the world, Al Ula reserves enough potential to be one of the most attractive archaeological destinations. Al Ula has numerous attractive, eye-pleasing, and heart-cooling elements to get in touch with them. So, the government of Saudi Arabia is collaborating with experts from around the world for the development of Al Ula. They have already signed an effective deal with France that includes projects for hotels, transport infrastructure, and a world-class culture and art museum.

Although you will find a lot of restaurants and hotels for accommodation there, a plan is also taken to build a resort within 2023 in the Sharaan area of Al Ula. And Indeed, if it happens then it will result in residential neighborhoods, a conference venue, relaxing areas, and restaurants. The Royal Commission of Al Ula has already completed a crucial project for an international Airport here. So, Al Ula has now become a global destination for culture and tourism.

Firstly, we all should know the history of Al Ula city according to Islamic significance. According to Islamic scholars, Madain Saleh of Al Ula was the town of the Prophet Saleh (PBUH) from the tribe of Thamud. The tribe of Thamud built their homes on Mountaintops. Allah SWT had given them power, riches, and lands with rich in cops and grains. But instead of worshiping Allah SWT, they worshipped idols. So, to guide them to the right way the Almighty sent Saleh (PBUH) as the prophet to them. The people of Thamud liked and respected Saleh (PBUH) as he always gave them good advice with his wisdom. But whenever the Prophet started to call people to the way of Allah SWT, most of them disbelieved and refused him.

Prophet Saleh (PBUH) continued to call them to believe in Allah SWT and worship Him alone. But they desired from him a miracle that would prove his prophethood. By the command of Almighty Allah, he brought to them a pregnant she-camel from inside a mountain as a miraculous sign. After that, few people believed him but most remained unbelievers. When the she-camel wanted to drink, then the Prophet (PBUH) requested the people to give her water. But they did not do so and killed the camel. Then the Prophet Saleh (PBUH) issued a warning saying, “Enjoy life for three more days, then the punishment will descend upon you.”

Prophet Saleh (PBUH) thought that they might realize their mistake before the three days had passed and repent of their actions. But unfortunately, they sent some people to kill him instead. Then the Almighty Allah saved him from their plot and ordered him to leave the place with the believers. After three days had passed in this way, Allah SWT wiped out all the people of Thamud with a rumbling noise and a severe earthquake. The story of Prophet Saleh (PBUH) and his tribe has come in the Holy Qur’an in several verses.

A Hadith of Prophet Muhammad (PBUH) plays a very significant role for the Muslims to travel Madain Saleh. He says, “Do not enter the ruined dwellings of those who were unjust to themselves unless (you enter) weeping. Lest you should suffer the same punishment as was inflicted upon you.”  – Sahih Bukhari 3318

So, the important message from this Hadith is to be cautious and repent of our trespassing on Allah SWT’s order and worship while we travel this place so that we too never fall in such punishment. That’s why on the way to the entrance of the town, we can see the billboard telling people to discover Islam rather than discovering Madain Saleh.”

Either for a solo or family tour, Al Ula is one of the most magnificent and ancient locations in the middle east now. The tour of Al Ula will give you a live history of pre-Islamic thoughts while you visit Madin Saleh. It will let you know the life and livelihood of ancient people with their art, expertise, and excellence. Its historic architectural and geographical significance, artifacts, heritage, aesthetic art, and wonderful landscape have undoubtedly made it an ideal place for a memorable vacation. So, come here to Al Ula to explore the newly discovered hidden Jam of Saudi Arabia. And indeed, don’t forget to bear the message of the Prophet Muhammad (PBUH) before you get into Al Ula.